It isn't called Asia's shopping capital for nothing! Hong Kong is an inexorable magnet in steroids pulling you back over and over, making you vulnerable with it's unremitting intensity. It's a depot of  purchasing necessities that will appease the incessant ricocheting of shopping ardor inside your head. -- Okay, enough of the metaphors. My brain waves were somewhat pivoted when i was growing up that this is a place for plain shopping (credits to my folks in hush tone). Turns out, there's more than just spending activities in Hong Kong that could sweat you out entirely.


This is where I staunchly understood the bedrock of how it is to be both a luxurious traveler and a true-blue backpacker; to flake out into utilizing a road map so as not to get lost around town; and more importantly to inscribe my travel calendar & rough in a come back trip even if I had just arrived on their airport -- things that exemplify my love affair with Hong Kong. For the past 5 years, I have moved mountains and crossed every shallow water to make my visit a yearly thing. I'm one smiling nomad for pulling it off. 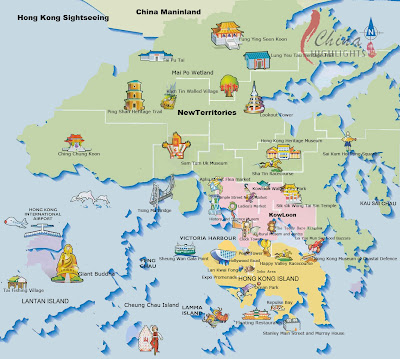 Snippets of what you should know. . .

Positioned at the south coast of  China, east of Macao and surrounded by the South China sea and the Pearl of River Delta, it is made up of three main districts: Hong Kong Island (Central, East Coast & South Coast), Kowloon (Tsim Sha Tsui) and New Territories.


Like many of its Asian neighbors, it was a former British colony, and a densely populated tiny city (around 7 million). Today, it has embraced people from other countries and foreign influences transforming the entire nation into Asia's World City because of  it's cultural diversity. It serves as a cradle to various citizens like Vietnamese, Filipinos, Indians, Australians to even those from the African continent. 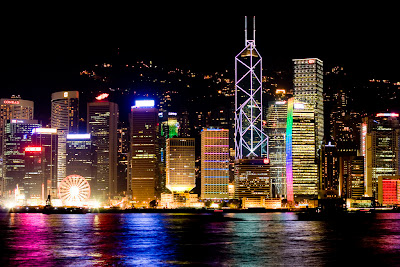 Spring - March to May 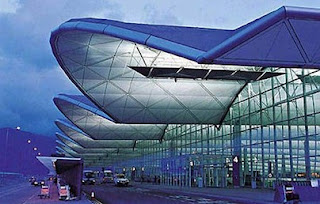 Considered as the gateway for international travelers, the Hong Kong International Airport in the Island of Lan Tau is a major connecting point to multiple cities in the world. With more than 100 International airlines servicing in this airport, it is one of the biggest in the Southeast Asian region.

What you need to get in

With it's aim to be the world's largest open city, most foreign passports do not require VISA when entering Hong Kong. US Citizens could stay for up to 90 days and 180 days for United Kingdom travelers if on social visits, while other Asian nations like the Philippines can be granted 14 days of stay upon arrival.

For Visa Requirements in Hong Kong, click this site: http://www.immd.gov.hk/ehtml/hkvisas_4.htm

To actually summarize my personal food faves in this post would be absurd and impossible. So I'll make this as detailed as it should without boring your rumbling tummies. 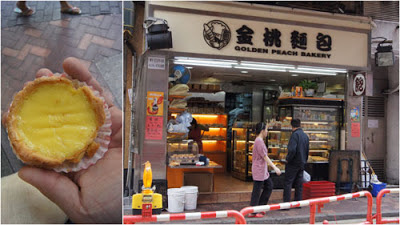 1. EGG Tarts -  Move over Macao and Singapore, with all honesty, HK egg custard tarts have been the BEST I tasted so far. It's great that bakeries like Tai Cheong along the Central District  were able to preserve the authentic Cantonese recipe and has been passed on from generations. 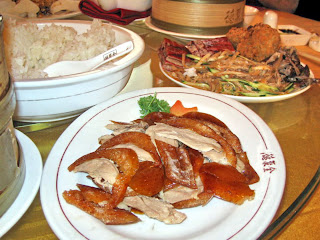 2. PEKING ROAST DUCK - The star of every HK dinner I had, not because of the long minutes I have to  endure in waiting for it to be served (you have to wait for like 20-30 mins. as they prepare each duck meticulously), but because of the bursting of flavors and perfect texture inside my mouth with each bite of crispy peking duck. Look for Spring Deer Restaurant in the heart of Kowloon and get a taste of this wonderful bird.

3. HONG KONG Style NOODLES - You will never go back into your instant noodle cups once you dig on HK's famous Won ton noodles.  The rich broth of every spoonful will insanely captivate your soup cravings. Their stir-fried version is also a must-try! Chim Chai Kee Noodle house has the best bowls served at the cheapest price and has 2 branches in the Central district. 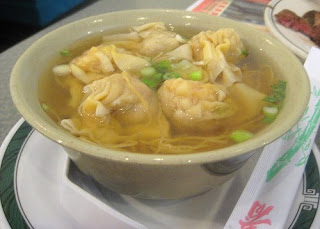 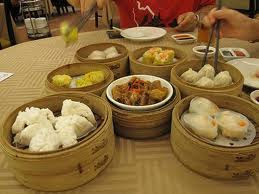 4. DIM SUM & DUMPLINGS - I could stay on the table for hours eating dim sum and dumplings, tray after tray after tray! I love how these are freshly hand made and served straight to your table from the steamer.


As modern as HK may seem, one of the greatest experiences you'll get to have in this capacious and chaotic city is when you discover its old side. Hidden among the crowded streets and soaring skyline are alleys that serve as the remaining reminiscent of Hong Kong during the yesteryear. Most of the restaurants that serve century-old recipes could be tracked down in this area and you'll be surprised on how they have kept their prices as low as possible. In Kowloon, shopping stalls lined up the streets, offering souvenirs and just about any thing that you need to buy. 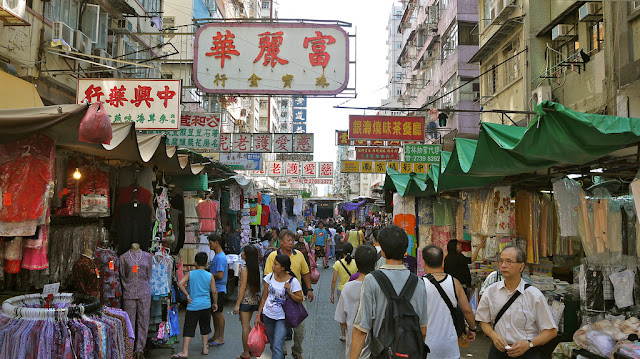 The most efficient way of hopping from one district to another is through the city's subway (MTR). It operates as early as 5:30 in the morning up to 1 am the next day. The railway is made up of 9 intersecting lines that could get you anywhere of the 3 major districts and other islands. Just ask for a subway map on any of the MTR station counters and you'll undoubtedly never lose your way. 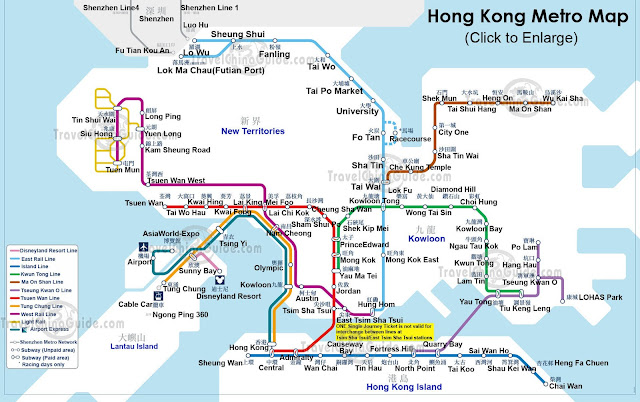 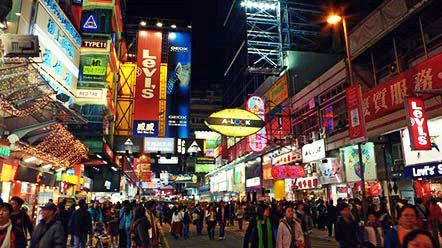 This is the epicenter where shoppers experience an astonishing TAX-FREE shopping. No wonder HK is the leading retail therapy destination and is always ahead of other top rival cities like Singapore when it comes to number of tourists each year. 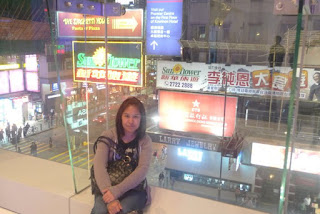 Yes, this is on top of my list, and yes, you don't know shopping if you haven't walked along Nathan Road for night market! 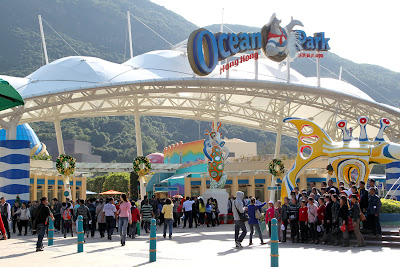 I love the fact that we don't need to go beyond Asia to experience pleasurable theme parks with world class entertainment. Ocean Park was built in 1977 and has received numerous prestigious awards like the Most Visited Theme Park in the world by Forbes. It  can be seen in the Southern District of Hong Kong and houses various animal exhibits and rides. 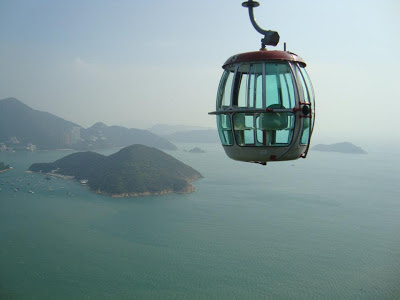 One of the popular attractions in Ocean Park is the exhilarating cable car ride that takes you from The Summit to the The Waterfront area, the two being separated by a mountain peak. 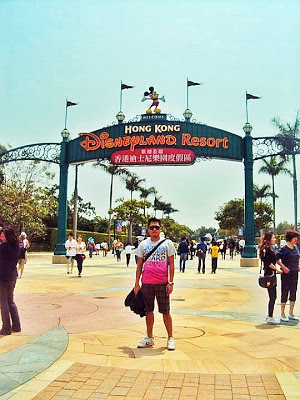 "A magical experience" is what Disneyland promises to its 5 million visitors each year since it started its operation in September 2005. Located on Penny's Bay in Lan tau island, this 55 acres amusement park has well maintained vicinity where one could enchantingly be indulged in a completely themed environment. With 6 specially designed areas (soon to be 7 in 2013), Disneyland hosts to many park rides, restaurants, shopping alleys and live entertainment that kids as well as kid at heart can take advantage of. 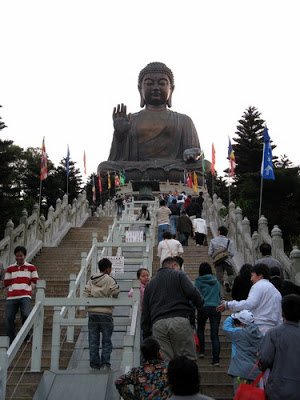 Another must-see attraction in Lan tau Island is the Tan Tian Buddha (Big Buddha) built in 1993. This massive statue is about 34 meters high and is made up of pure, solid bronze. 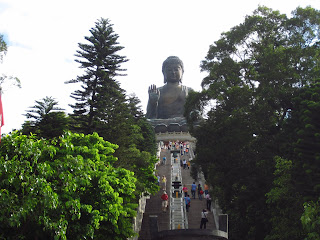 The 268-step staircase that leads to the giant buddha seated on top of the hill. 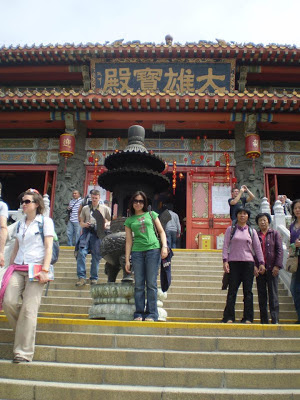 The Po Lin Monastery is a place of worship for Buddhists where you could take a closer look at Hong Kong's wealthy cultural side and offer some petitions you might want through prayer. 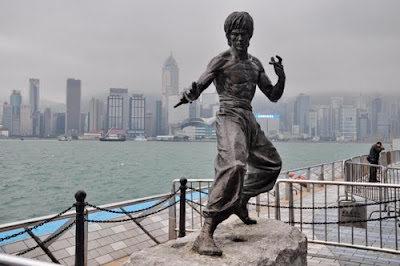 Their version of Hollywood Walk of Fame, Avenue of Stars in Tsim Sha Tsui Promenade is a  tribute to outstanding Hong Kong artists in the industry of film. The breath taking view of Victoria Harbour waterfront with Hong Kong's massive skyscrapers is a plus factor when you spend one afternoon strolling in this area. 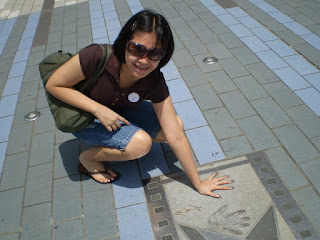 Along the 440 meter stretch are stars of famous celebrities like Jackie Chan, Bruce Lee and Jet Li.


The most enjoyable way to climb Victoria Peak is to take the Tram and enjoy the scenic view as you make your way up. This is the highest point in Hong Kong, so you'll get to take a look of the whole city 552 meters high!

One of the two (2) musuems to be found in Asia (the other one in Shanghai), The Madame Tussauds Wax Musuem at the Peak Tower in Hong Kong Island showcases wax replicas of world renowned celebrities both Hollywood and Asians. 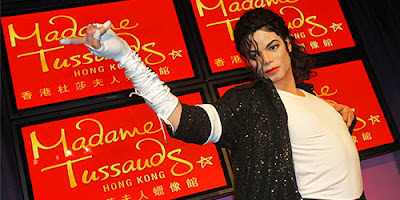 The King of Pop, Michael Jackson's realistic wax replica, just one of the featured artists in Madame Tussauds Musuem.


So in a scale of 1-10, I rate Hong Kong as 9. Nope, it isn't because this is the only place I visit at least once a year, and also not because I have seen it so many times I consider it as my 2nd birthplace. Firstly, it is an enormous city with so much inscrutability, a culmination of both the old and new. In here you get the best of both worlds, modern and traditional, so there's no need to hit Mainland China to experience the true feel of Chinese culture. Another tremendous factor is the tax-free shopping spree they offer for all tourists and visitors, a rarity in other cities overseas.


There is so much in Hong Kong that I still want to catch sight of and discern at the same time. It will always remain as a perplexity as to why I have fallen completely in love to this place, maybe it's high time you unearth yours!

Posted by essieheart at 7:49 PM

Photo grabbed from worldatlas.com Not exactly Fiji, but diverting all my research efforts into debunking Maldives is what we'll ...

STALK ME ON THESE SOCIALS